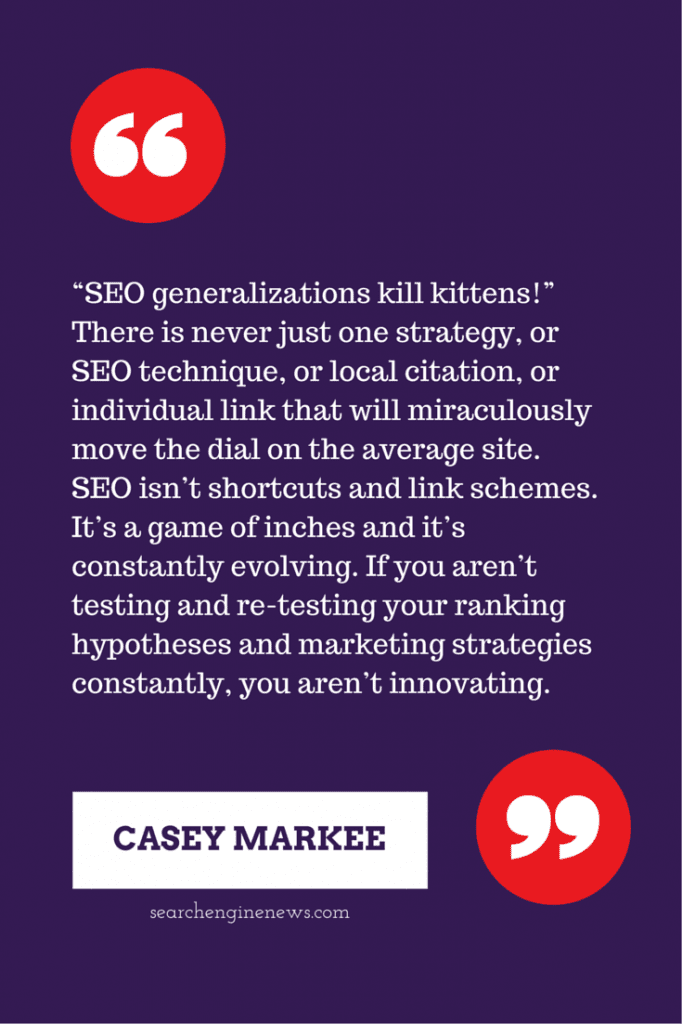 We at Infinity Dental Web have a little secret we’d like to share with you: we don’t know everything! Every successful company is driven by a thought leader who seems to know it all, but behind every good leader is a mentor. That’s why we’re not ashamed to say that even with our abundant SEO experience dating way back before Google was even invented, sometimes we have to ask an expert.

That expert is our case happens to be Casey Markee, the Head of SEO for Search Engine News and proprietor of digital agency, Mediawyse. Casey has over 16 years worth of SEO experience himself and has trained teams on five continents. We have done our continuing education SEO training with Casey and his team for several years now and he happens to be our go-to guy for especially tough SEO situations. Taking all this into account, I was super excited when a couple weeks ago, Casey graciously allowed me to question him as the first segment in our soon-to-be-famous Thought Leader Interview Series.

What was your college major and how did you get into SEO instead?

My college major was actually History and Politics. I intended to go into law and always thought I’d be an attorney. After gaining admittance to law school here in San Diego back in 1997 I only lasted a year when I realized it wasn’t for me (but on the positive, it’s where I met my wife).

I then transferred to a local MBA program and started working with several area Internet start-ups including CoastlineAdventures.com and MagneticMattresses.com among others. My experience running the online marketing campaigns for them and my completion of one of the first professional digital marketing certificate programs in the country in 1999 at San Diego State University gave me the confidence to open Media Wyse in 2000.

What were your initial reactions to the Penguin & Panda reforms?

My initial reaction was: what took Google so long? It had been a known and debated issue in SEO circles for years, before the launch of Panda in 2011 and Penguin in 2012, that SEO manipulation was rampant in the search results and overall quality was questionable at best. 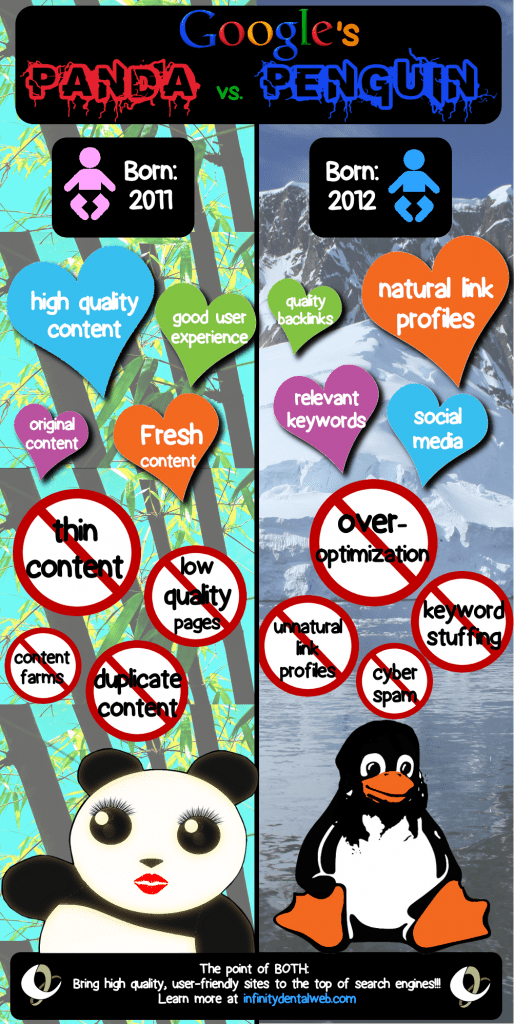 When Panda was initially launched (affecting well over 12% of all search results) it was done so to knock-out content farms like Mahalo, penalize “shallow” content, and lower the ability of scraper sites to rank. Although it took several updates, Panda has done all of those well and has redefined what the idea of quality content involves. If you are a content writer and you can’t adequately address Google’s 23 Questions on Content Quality in what you are presenting to your audience, your content probably isn’t worthy of indexation and ranking.

Similar to how Panda was designed to punish the worse content offenders, Penguin was Google’s response to site owners who continued to violate Google Webmaster Guidelines. Most people forget that when Penguin was first launched it was referred to by Matt Cutts as an Over-Optimization Filter but has since become known more as a harsh Webspam level penalty. Although Penguin is viewed more as a link spamming based penalty that targets sites with over-optimized anchor text profiles, those who’ve engaged in link bombing, or sites who have an incredibly toxic and low-quality backlink profile, Penguin should really be viewed more generally and cover an ENTIRE site’s current optimization approach.

Do you believe that Google’s changes in their search algorithms has improved the user experience or was it self-serving? Or both?

It’s definitely both. There is no doubt that these two algorithms have provided a more level playing field for sites online and significantly increased the user experience of currently returned search results.

But as a publicly traded company, Google also understands the benefits (specifically, increased traffic and monetization) that come with providing the HIGHEST quality possible search results. To accomplish this, Google must quickly and accurately return the best representative sample sites, services and products possible from the worldwide web that match the searcher’s query.

Bottom line: if you are a pet groomer looking for a referral in San Diego, CA and Google can’t return the appropriate qualified result you probably aren’t going to return to Google.  Most SEOs would have to agree that Google search results are substantially better now than they were pre-Panda and Penguin.

What do you wish all your clients understood about your industry? (A PSA)

That “SEO generalizations kill kittens!” In other words, there is never just one strategy, or SEO technique, or local citation, or individual link that will miraculously move the dial on the average site. SEO isn’t shortcuts and link schemes. It’s a game of inches and it’s constantly evolving. If you aren’t testing and re-testing your ranking hypotheses and marketing strategies constantly, you aren’t innovating.

In what ways and direction do you think the SEO industry will evolve in the future? – Wearables may change the SEO game considerably in the coming months and years. That’s actually something I’m currently researching for my upcoming SMX Advanced Seattle speaking session in June.

What usability features do you anticipate search engines and mobile users will demand in the future?

Good question. I believe the future of search is more local personalization and geotargeting. You may see search engines “pushing” users more as opposed to “pulling” them meaning that you will probably start receiving information, notifications, and tactile alerts to your phone or other wearables even when you aren’t looking for them.

Expanding on this, I believe you’ll start seeing Google evolve their Google Now functionality to be hyper-targeted. They really want to be your personal assistant and that means more anticipation of needs and less reactionary query fulfillment.

For mobile users, this may lead to an increased demand for personalized virtual assistance not just from search engines but from retailers. The movie Minority Report with Tom Cruise was set in the year 2054 and yet that kind of personalized predictive need fulfillment (that the main character experienced running through the mall) may not be NEARLY as far off as the movie depicted.

I wrote up my annual SEO and Digital Marketing Predictions article for SEN that was published last January. In that article I predicted the move by Facebook to mobile payments (happened here), the rise of Wearables SEO (hello Apple Watch) and that Google would value mobile-friendly content higher in the SERPs (will happen on 4/21). I expect all of those will continue to be big in 2016 and I would add that I expect more changes to happen on the HTTPS front. So far that’s a “lightweight” signal. But Google could change that anytime.

And finally, who is your favorite comic book superhero? Which movie did Marvel studios do the best? 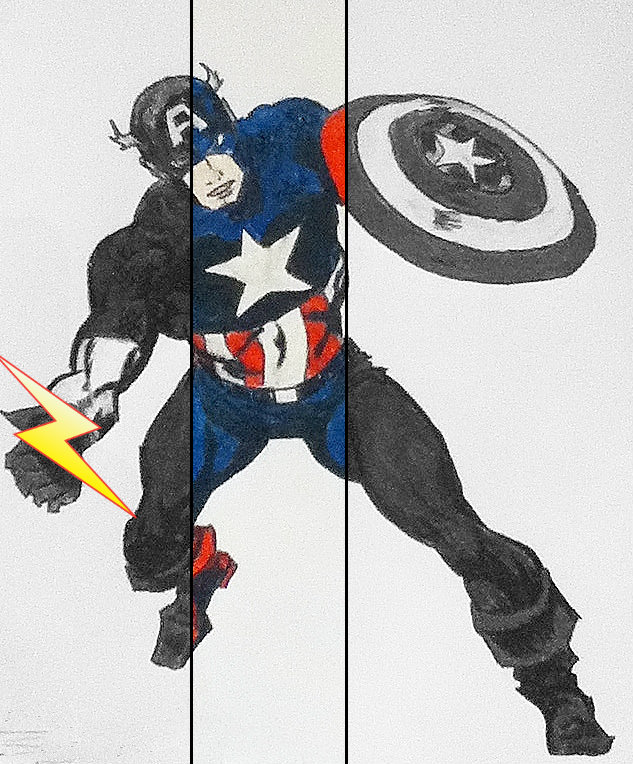 This is a great question in that I’ve been a comic book collector since I was 7 years old. I have even attended Comic-Con International every year here in San Diego since 2000! I’ve always been a big Captain America fan and even own a copy of his first modern comic’s appearance in Captain American #100 from 1968. As for the Marvel movies it’s really hard to choose just one, but as of right now I’d have to say Guardians of the Galaxy is my favorite (at least until I see Avengers 2).