2017 was a tough year for Google and its review policies.   We saw an increase in spam reviews where fake negative reviews were being placed on businesses as well as crazy stories of how certain businesses were soliciting reviews in mass quantities.  Yelp has set a pretty decent bar for trustworthiness of reviews.  As complaints have come rolling in on the Google My Business forums about the trustworthiness of Google reviews, they have been trying to do better. 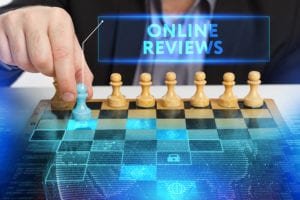 Google has for a long time prohibited the soliciting of reviews in exchange for something, but the interpretation was twisted by some which led to a bit more definition to this policy. Before the update, the guideline read simply:

Seems fairly clear. However, there was a case of a law firm who was entering people into a contest for free zoo tickets in exchange for writing a five-star review. They got away with this for a while by concealing the offer. They ended up getting caught and Google took down all their reviews but one, and they may have been an influence in Google tightening up the wording in its guidelines and adding a prohibition of ANY bulk solicitation of reviews, whether in exchange for something or not.

Here’s the new wording posted in December by Google:

Google has also recently come out against the filtering of reviews requests. Some companies have provided software that asks for customer feedback and only if the feedback is positive will they follow up with instructions on how to leave reviews. Google ended up removing many reviews solicited through this software, and the companies have since removed this feature.

Google also considers reviews to be fake if they are generated from the same IP address. So dentists who have set up a tablet or station in their office where they ask patients to stop and leave reviews have later found those reviews removed by Google.

The new guidelines also specifically state that reviews by ex-employees are against the guidelines. This can be found on the Prohibited and Restricted Content section of the guidelines, under the Conflict of Interest drop down.

Are the New Guidelines a Good Thing?

I believe the tightening of the review guidelines is a step in the right direction for Google.  I have seen far too many cases of fake reviews both positive and negative. As consumers, we want reviews to be genuine, and I applaud Google’s efforts to try to insure that. I believe that they are on the right track and I predict many review guideline updates throughout 2018. Until then I will keep fighting the fight for fair representation through the use of the Google review system for all of my clients.