Yesterday, I got my copy of Dental Economics in the mail. On the back cover is an ad from one of our competitors, Officite, with the headline: “You’ve Had Your Website Since an Apple Was Just a Fruit.” And then under that, “The Internet moves fast. Are you keeping up?” 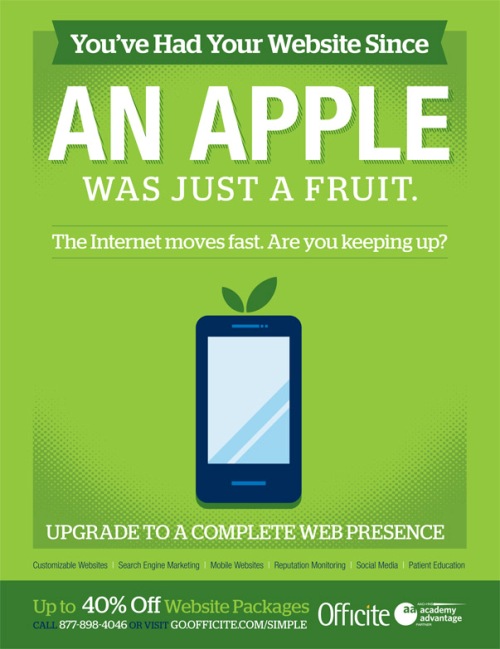 I’m sorry, Officite, it’s a cute ad, and maybe I should just admit that its cuteness trumps its accuracy and leave it alone. But I’m not going to leave this one alone.

First, Apple computers was founded in 1976, so it pre-dates the rolling out of the Internet for public use, and pre-dates by a good two decades when dentists began having websites. Even if you use the date of the introduction of the Macintosh line of computers in 1984, which is when Apple Computers began to become a household name, you’re still a decade before the Internet became the subject of household discussion.

So you’re off on one point. But there’s more.

I looked through Officite’s company website. It doesn’t have a lot of information about how they run their services, so I have to guess somewhat on how they operate. But the way they present their services makes it appear to me that they do Facebook marketing and blogging the way almost every other one of our competitors does – with stock posts. Which doesn’t fully adjust to the present nature of Internet marketing.

If I had run the ad, I wouldn’t be talking about websites that are stuck back in the last century – I would be talking about dentists who are doing business with Internet marketing companies who are stuck back in May 2012, which means they are dangerously behind the times. A large part of our corporate energy is spent keeping up with what is happening with Internet marketing, and we get an update course every month. Just this past month, for example, we have the Google City Expert program and major upheavals in site speed specifications. Last month we had the Google Penguin 2.1 update. No, it is way off base to be talking about the changes decade by decade. We should be talking about changes month to month. When we do our monthly update courses, there is not a single other dental website company in attendance, and it shows in their marketing.

Yes, dentistry is a particularly conservative profession. Goodness, we still have a number of dentists whose primary restorative material is amalgam – which is 1840s technology. And in their marketing, they may be stuck in the heyday of Yellow Pages advertising, so this ad could hit them right between the eyes. But if you really want to excel in your marketing, you need to be much quicker than Officite is suggesting. And I don’t think that Officite themselves are truly keeping up the way they should be.

David Hall is the founder and president of Infinity Dental Web. He was a practicing dentist for many years and is an accredited member of the American Academy of Cosmetic Dentistry.
Tags: Apple Computers, Dental Economics, Internet, Officite, You've had your website since an Apple was just a fruit