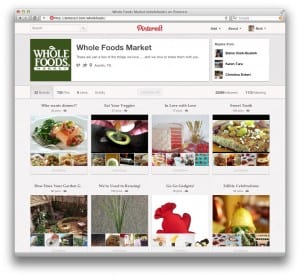 A picture is worth a thousand words…unless you’re posting it on FaceBook /Twitter/Pinterest, in which case, it may be worth a million.

In a recent study of the top 10 brands on Facebook, users liked photos twice as often as text updates and they shared videos 12 times more than photo and text posts combined (MarketingProfs).    Over 100 million YouTube users take a social action on video every week with over 700 of those videos shared on Twitter every minute (Mashable).   Instagram, the free mobile photo-sharing and social networking tool, launched in October 2010, already boasts over 80 million users making it on pace to beat Facebook’s record 100 million users in four years.  FaceBook has recognized the power of visual content by not only buying Instagram for $1 billion, but making their own site more visually driven as well.   The recent Facebook timeline update features bolder graphics and visual story-telling with the Timeline cover photo, larger wall post image dimensions, and the timeline itself.

This information seems to indicate that people like to see pretty pictures rather than read words, especially when they’re engaging socially.  To further support this, take a look at Pinterest:  Pinterest was launched in a closed beta in March 2010.  By December 2011, Pinterest had 11.7 million unique users, making it the fastest website ever to cross the 10 million user mark (Wikipedia).  The site had 52% growth in February 2012 alone.  Pinterest is basically just a social bookmarking tool but it bears recognition not only from popularity but because photo and video posts on Pinterest are currently referring more traffic to websites than StumbleUpon, LinkedIn, Google+, and even Twitter (Mashable).  What’s even more astonishing is that the site had a closed “Invitation Only” format until earlier this month (August 2012).

So, here are some tips for the future:

We are now offering custom social media packages here. Contact us to get a beta tester discount today!