Resolve to Do Social Media Better in 2016 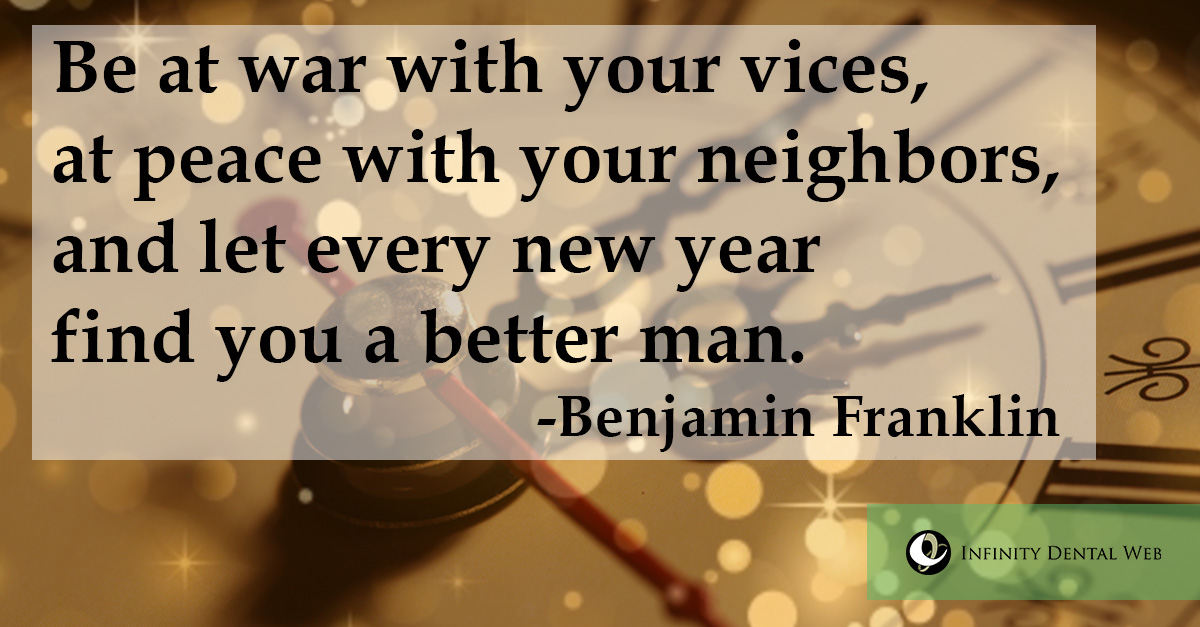 I’m not usually one for making concrete and definitive New Year’s resolutions. Every year the clock strikes midnight on Jan. 1, and I promise to do the same thing. Smile more in the upcoming year.

Sure, there’s no real way to measure success. But, if I can look back at a year and say I embraced every opportunity life threw at me, overcame the challenges, and learned a few lessons along the way, I probably came out in the black.

While this may work in my personal life, I’m not aware of a company that experienced sustained success by throwing ideas at the wall and seeing what sticks—or at least not without a strategy behind the toss.

If changes to existing social networks, the additions of new networks, and ever-evolving best practices have you feeling like you spent the 2015 playing catch up, have no fear. I’ve put together a list of social media marketing resolutions to add to your list.

It’s all about the Benjamins

In addition to visibility, sponsored social offers consumers something else. Value. Hyper-targeting allows marketers to serve content to the audience seeking that information. For example, a family dentist might target a blog post on the reasons a family should see the same dentist throughout the course of each member’s lifetime to new and expectant moms within 10 miles who have a propensity to click on health-related content.

In 2015, 54 percent of marketers sponsored social content; and significantly more marketers are expected to get onboard in 2016. New sponsored social opportunities (think: carousel and Instagram ads, and promoted pins) and additional players entering the auction-based market, will continue to drive up ad prices. While these ads remain significantly less expensive—and more effective—than traditional advertising, you’ll need a budget to ensure these messages get to the right audience at the optimal time.

Resolution: In 2016, I will increase my budget for sponsored social.

Live in the moment

Discussions about real-time marketing dominate list after list of social media trends. Consumers expect brands to be nimble enough to respond to what’s happening in the world.

Facebook recently announced a small percentage of iPhone users in the United States are testing live video. Similar in concept to Meerkat, Periscope, and Blab, throughout your broadcast you’ll see the number of live viewers and their names, as well as any comments in a comment stream. When finished, broadcasts save to your Timeline for future viewing.

By clearly defining your brand’s authentic voice and persona, you empower your social media team to participate in in-the-moment marketing. Knowing the brand allows them to know what the brand would “say” in these impromptu situations.

Real-time marketing shouldn’t completely circumvent planned content. Successful social brands plan the majority of their content, so that they can take advantage of situations in which they interact with fans and consumers in a more off the cuff manner.

Try collaborating with your Sonicare rep to chat about the benefits (and even drawbacks) to the Sonicare DiamondClean. Or, ask your hygienist to demonstrate proper brushing and flossing techniques. If you’re on the lecture circuit, try flipping the script—broadcast from the stage while you’re warming up or during the Q&A session.

Resolution: In 2016, I will make instant, real-time connections by marketing in the moment.

In case you missed the last time I mentioned it, video is kind of a big deal. In last year’s 2015 State of Digital Marketing, 70 percent of brands reported video as being the most effective content marketing tool available. And, in November, Facebook announced video views hit 8 billion daily (literally doubling just eight short months).

With Facebook expected to roll out a dedicated video stream featuring suggested videos in early 2016; 360 video and native Twitter videos already available; short-format video on Vine and Instagram (including one-second Boomerangs), and features like Story replies, lenses, and filters building Snapchat into a more relevant (and exciting) branding tool, expect an upswing in the amount of video users consume in 2016.

Avoiding video because of the expense? Great video content doesn’t have to have a high-production value. We have several clients who’ve incorporated video into their content strategy by taking advantage of their Smartphone’s video capability. The addition of these videos has increased their organic visibility and elevated their online reputations. Start recording.

Resolution: In 2016, I will incorporate video—produced and real time—in my social content.

SEO has a new friend

Ask five friends where they would go to learn how to French braid their daughter’s hair. Go ahead, I’ll wait. I asked this same question to five friends last week. Without fail, all five said they’d search YouTube for a video. YouTube. Not Google. Not Bing. While your results may not be unanimous, I’ll bet your survey participants mention YouTube as well.

A culture shift is on the horizon in which we’ll see an increase on the number of consumers using social media networks in lieu of search engines to research a product or service. Even now, if you search a particular business (or long-tail keywords), Google results are peppered with the social accounts of that brand. This is one reason why Facebook is critical to your successful local SEO strategy.

Consumers are influenced by other consumers’ online comments. While the specific survey results vary—Moz reports more than 67 percent, while BrightLocal reports that the number is closer to 88 percent. In the dental vertical specifically, our research found that 57 percent of prospective patients read online reviews before booking. And, according to Healthgrades, “nine out of 10 consumers check patient reviews before choosing a physician—and most trust these reviews as much as a personal recommendation.” Because social media content regularly features online reviews and customer testimonials, customers will skip Google and Bing, and heading straight to Facebook, YouTube, Yelp, and Pinterest for options.

Social results are more visual than the text heavy results that appear in search results and on websites. Visual content (photos, videos, infographic) is easier to digest for consumers, and considered more trustworthy.

I think I’ve found myself a cheerleader

The seemingly overnight success of Slack—the social media like collaboration tool for business—suggests that employers are now embracing the concept of social in the workplace.  With the launch of Facebook at Work planned for early 2016, employees at Fortune 500s, small to mid-size businesses, and startups will have access to company news and information nearly instantaneously.

Your employees are already on social media—and 50 percent of them are talking about you. Employee activism allows companies to add value to those messages. According to Nielsen, 90 percent of consumers trust recommendations from people they know.

Only about one-third of employers encourage employees to use social media to share information about their organization. Providing your employees branded messages allows them to actively engage their networks, leading to increased sales (72 percent increase in sales versus 48 percent in increased sales for companies not encouraging employee activism) and brand awareness.

Resolution: In 2016,  I will engage my employees in our social media efforts, encouraging them to advocate on behalf of our organization.

Facebook currently claims about 54.4 percent of social networking market share. Don’t expect that to change. What will change, however, is the demographics of the social network. Facebook’s over 65 demographic is growing, as well as their international audience.

With mainstream networks like Facebook and Twitter already saturated, brands are turning to alternate, niche platforms like Snapchat, Instagram, and Periscope for increased viability. And they’re smart to do so. Engagement on these apps is sky-high, which works out well for the brands with a presence on these platforms.

Resolution: In 2016, I will evaluate the social networks I’m currently active on and consider potential networks based on my target market.

Do you even sell bro?

Mobile and social commerce are no longer the future. They. Are. Here. This year Pinterest, Facebook, Instagram, and Twitter introduced a new way to shop—Buy buttons—giving consumers the ability to purchase items directly though their network.

Consumers are embracing these buttons. A Shopify study found that the average price of purchase made on Pinterest is $50. What if a customer is at the top of the sales funnel? Shopify reported as many as 93 percent of Pinterest users plan their purchases with the platform.

Expect social commerce to skyrocket in 2016.

Resolution: In 2016, I will evaluate our products and services for ecommerce opportunities—can I see myself selling gift certificates or Sonicare using social platforms?

2015 was the year of content as social media shifted from funny memes and baby pictures to a platform on which brands were sharing relevant, valuable content. “Content is king” was used by marketing thought leaders ad nauseam, and when the horse was dead they added the caveat, “but, context is queen.”

The addition of publishing platforms like Facebook’s Instant Articles, Twitter Moments, and Snapchat Stories, on top of oldies such as Medium, Tumblr, and Reddit, reinforce the importance of good content (presented in a relevant context).

Having a good product isn’t enough. Being a great dentist isn’t enough. Your practice has a unique story. Telling that story in a meaningful way resonates with today’s consumer.

If I ruled the world

Good social media seamlessly blends public relations, customer service, brand management, advertising, and sales in a way that provides value for the consumer and the brand.

Gone are the days when social media or digital teams worked in a silo. Social media, SEO, digital, content, and community manager positions are now considered integral parts of the marketing team, allowing for a more comprehensive marketing plan.

Resolution: In 2016, I will include my social media team in marketing discussions, ensuring that our social strategy ladders up to meet overall marketing goals and business objectives.

Often social media is your first line of customer service. Remember the Friends episode during which Phoebe’s on hold with the customer service department of her bank for like 48 hours? Yeah, five minutes on hold is about my limit.

Whether it’s a private message, public comment, or review, social media is a convenient way to get the attention of a brand, and your customers are using it. It’s important to have a reputation management policy in place. At a minimum, your policy should include who is responsible for responding to posts or reviews, what response should look like, to whom to direct customers for a negative review or questions, and expectations for response time.

Bonus Resolution: In 2016, I will be prepared to respond to positive and negative comments and reviews, in addition to a public relations crisis on social media.

What marketing resolutions are you making in the new year? Share in the comments.